About Melanie May Melanie May is a journalist and copywriter specialising in writing both for and about the charity and marketing services sectors since 2001. She can be reached via www.thepurplepim.com. Civil Society Futures inquiry call for contributions Tagged with: research  58 total views,  2 views today AddThis Sharing ButtonsShare to TwitterTwitterShare to FacebookFacebookShare to LinkedInLinkedInShare to EmailEmailShare to WhatsAppWhatsAppShare to MessengerMessengerShare to MoreAddThis1 AddThis Sharing ButtonsShare to TwitterTwitterShare to FacebookFacebookShare to LinkedInLinkedInShare to EmailEmailShare to WhatsAppWhatsAppShare to MessengerMessengerShare to MoreAddThis1 Melanie May | 14 August 2017 | News Civil Society Futures is calling for contributions to its inquiry into the future of civil society in England.With a deadline of 5th September for initial submissions, Civil Society Futures is seeking contributions on what the future may hold for civil society, such as:How will the different forms of civic network respond to social, political, environmental and technological change?What types of civil society organisation will be important over the next decade? What purpose will civil society need to fulfil in the future?What do you think they should be doing?What do you think they will find themselves doing but should steer well clear of?It also welcomes submissions of relevant data, research reports, interviews, examples of best practice, and other evidence for issues affecting the future of civil society, including international contributions. Responses should be no longer than 1,000 words and multimedia contributions are encouraged.Submissions will support the creation of an open source bank of research into the future of civil society and may be shared publicly on Civil Society Futures’s online hub. Opinion pieces on the same topics are also sought – you can get in touch with Adam, [email protected], if you would like to contribute to the hub in other ways.The call for evidence builds on an initial literature review by Civil Society Futures and will help to expand this initial review and its associated open database as well as further inform the future research direction of the inquiry.The call for contributions sits alongside a strand of research via community workshops in eight locations across England. Further engagement via a series of Civil Society Futures Conversations will be running in parallel for communities of practice, interest or locality.All submissions received will be reviewed by the Inquiry panel members and a synthesis will be shared on this online hub as appropriate. An additional call for evidence may take place in January 2018 depending on initial submissions.  57 total views,  1 views today Advertisement

A Letterkenny Councillor has claimed there has been a lack of action on the LUTS study which was commissioned in 2009 to identify the town’s main traffic black spots.Councillor Dessie Larkin says that while there have been some measures introduced as a result of the study, a long term solution to traffic issues at junctions on pearse Road and Oldtown Road has yet to be found.The LUTS study founds 17 thousand vehicles used those junctions daily; he says the temporary measures introduced our causing heartache for motorists and local businesses.Councillor Larkin wants roads engineers to revisit the situation:[podcast]http://www.highlandradio.com/wp-content/uploads/2011/04/lark830.mp3[/podcast] Pinterest Three factors driving Donegal housing market – Robinson Calls for maternity restrictions to be lifted at LUH RELATED ARTICLESMORE FROM AUTHOR Google+ Traffic issues on Pearse Road and Oldtown Road need to be addresses – Cllr Larkin WhatsApp Facebook Twitter NPHET ‘positive’ on easing restrictions – Donnelly Pinterest

Google+ Any remaining election posters are now illegal RELATED ARTICLESMORE FROM AUTHOR Previous articleNorth West MEP wants more Indpendents in SeanadNext articleCall for dog license revenue to be invested in Animal Welfare News Highland Dail to vote later on extending emergency Covid powers WhatsApp Google+ Any General Election candidate, who has yet to remove election posters, is now in breach of the Litter Pollutions Act.Election candidates and their parties could face a €150 on the spot fine for each election poster which remains.Numerous election campaign posters remain across Donegal – poster ties for holding the electionosters must also have to be removed.Donegal County Council is responsible for inforcing the Litter Pollutions Act. 365 additional cases of Covid-19 in Republic By News Highland – March 5, 2011

The National Crime Agency (NCA) has completed one of its most spectacular proceeds of crime coups after a family behind a collapsed holiday home business agreed to return property and cars worth £8.1 million to the exchequer.This includes a villa in the Canary Islands and 16 commercial and residential properties in and around Bath plus a luxury Range Rover.As The Negotiator reported last month, the Davies family’s assets were recently frozen by a court but at the time the legal action was thought to be linked to the collapse of their business, which both rented and sold holiday homes at sites in Norfolk, Suffolk and Cambridge.The four members of the family, who are Shane and Rhianna Davies, mother Sheila and sister Tracey, have agreed to surrender the assets after conceding that they derived from the ‘proceeds of unlawful conduct’.Their huge property portfolio, which generated an income of approximately £400,000 a year, was acquired between 1998 and 2007 with funds derived from mortgage fraud and the sale of drugs, the NCA says.JacuzziIt included a seven-bedroom converted barn with an indoor jacuzzi and swimming pool and an 18th century Georgian townhouse (both pictured, above).“It is vital to the UK’s economic wellbeing that assets are held legitimately, and the NCA is determined to recover property acquired through the proceeds of serious and organised crime,” says Andy Lewis, the NCA’s Head of Asset Denial, who worked closely with Avon & Somerset Police on the case.NCA proceeds of crime National Crime Agency November 5, 2019Nigel LewisWhat’s your opinion? Cancel replyYou must be logged in to post a comment.Please note: This is a site for professional discussion. Comments will carry your full name and company.This site uses Akismet to reduce spam. Learn how your comment data is processed.Related articles BREAKING: Evictions paperwork must now include ‘breathing space’ scheme details30th April 2021 City dwellers most satisfied with where they live30th April 2021 Hong Kong remains most expensive city to rent with London in 4th place30th April 2021 Home » Crime » Criminal family surrender 16 properties worth £8.1 million after investigation previous nextRegulation & LawCriminal family surrender 16 properties worth £8.1 million after investigationIn one of the UK’s extraordinary proceeds of crime recovery cases, the National Crime Agency has persuaded the Davies family to surrender the assets.Nigel Lewis5th November 201902,304 Views INDIANAPOLIS (September 20, 2016) – Indiana set all-time highs in total labor force (3,379,290) and total number of employed (3,226,385) as the state’s seasonally-adjusted unemployment rate dipped to 4.5 percent in the month of August. The unemployment rate is a U.S. Bureau of Labor Statistics (BLS) indicator that reflects the number of unemployed people as a percentage of the labor force. Indiana’s labor force, a measure of Hoosiers employed or seeking employment, has increased 78,756 – with 77,113 finding employment – since the start of the year and by nearly 200,000 since January 2013.“Indiana’s employment and labor force sit at record highs and its labor force participation rate outpaces the nation by nearly three percent, however, significant gains are still achievable to reach our workforce potential as a state,” said Steven J. Braun, Commissioner of the Indiana Department of Workforce Development (DWD). “As we move forward, it remains essential for DWD, WorkOne and community partners to continue all efforts to locate and train those who are not actively participating in Indiana’s workforce.”Commissioner Braun also noted that private sector employment increased by 5,600 jobs in August and stands at 37,100 above the March 2000 peak, which is the 14th-consecutive month above that peak. 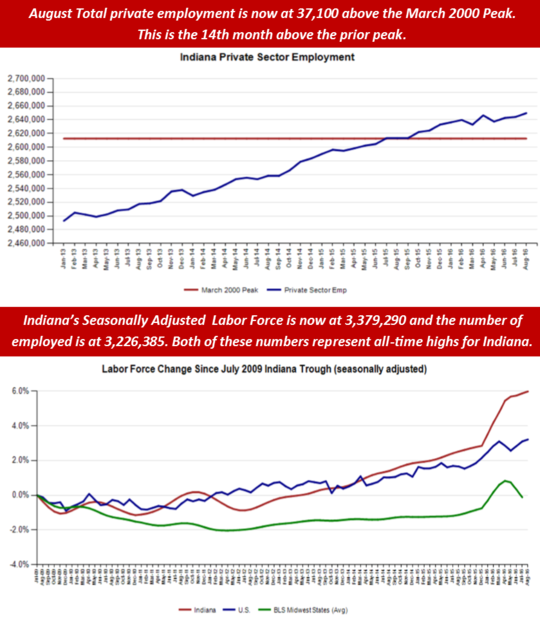 Employment by SectorThe highest levels of growth occurred in the Professional & Business Services (5,300), Leisure & Hospitality (3,500), All Other (1,600) and Financial Services (400)sectors. Gains were partially offset with losses in the Construction (-2,300), Manufacturing (-1,400), Trade, Transportation & Utilities (-1,300) and Private Education & Health Services (-200) sectors. Over the past three years, Indiana’s private sector has grown by 156,800 jobs.Midwest Unemployment Rates

Yesterday, the legendary funk musician William “Bootsy” Collins underwent ear surgery, removing a tumor located on his ear drum. The surgery went went well, and Bootsy Collins is in high spirits and on the mend. While Bootsy had to cancel his upcoming tour dates while he’s in recovery, the Parliament Funkadelic bassist is clearly looking toward the future with the recent announcement that he has a collaboration with Buckethead in the works. In Bootsy Collin’s statement, he noted that the two iconic musicians would be teaming up on a new album as soon as Collins gets his “ear back.” He also stated that the duo already have an album title in mind, and that fans are going to dig it. Hilariously, he instructed fans to keep “love vibes flowing for both of us, we both lookin’ pretty crazy.”Bootsy Collins Undergoes Surgery For Ear Tumor That Caused Tour CancellationWe can’t wait to see what this crazy lookin’ duo are cooking up once Bootsy back in the saddle. Get well soon, Bootsy, so we can hear what you guys have i the works for us fans!

Your daily outdoor news bulletin for September 30th, the day Wyoming became the first state to give women the vote, proving that in the land of no people, the woman is king:Blue Ridge Parkway to Stay OpenWith a U.S. government shutdown looming, and with Congress still not doing anything about it, federal agencies are attempting to go about their business like nothing is wrong while simultaneously going about their business like there is a class 5 hurricane bearing down on them. One such agency is the National Park Service which could affect Great Smoky Mountains National Park, Shenandoah National Park, and the Blue Ridge Parkway – of course there will be other casualties in the park system but those are the big fish so to speak. All inquiries into the matter are being deflected to the Department of the Interior, but a shutdown now could have a huge economic effect on not only the parks in question, but also the surrounding communities given this is the most popular time for all three. It is leaf peeping season after all. Officials with the Blue Ridge Parkway, while considering closing the 400+ mile road earlier in the week, now say the BRP will stay open through a shutdown although all campsites, historical sites, visitors centers, etc. will be closed.For a full report, and an interesting story on what Arizona tried to do with the Grand Canyon during the 1995 shutdown, see this National Parks Traveler story.National Registry of Stolen Bikes…MaybeWhen you have your bike stolen, there are many emotions that run through you. Maybe you feel betrayal that your privacy was violated, maybe you feel angry someone stole your whip, maybe you feel frustrated the police are not really able to do anything for you. Well, a group in Chicago is working on that last one. Through a site called Bike Index, a group of advocates is hoping to provide riders a more comprehensive way to track down their stolen bike. Many cities and communities already have bike registry services, but they usually involve paperwork and a trip to the police station, and they are kept private. Bike Index wants to streamline the process by allowing users to register their bikes online using the bikes serial number. With more access and public info, and more bikes registered, the operation will not only help people track down their bikes when they get stolen, but discourage future thefts. The service is only available in Chicago at this time, but the founders hope to expand nationwide.Check out the story on Fastcoexist.com and their Kickstarter campaign.Annapolis HonoredThe brackish community of Annapolis, Maryland is the latest community to receive an honor from the National Wildlife Federation. This week, the city was designated a National Wildlife Federation Community Wildlife Habitat, becoming the 71st Community Wildlife Habitat in the nation, and second in Maryland. It seems as though the honor is the cumulative capstone in Annapolis’s efforts to green up their city: “A Community Wildlife Habitat project creates multiple habitat areas in backyards, schoolyards, corporate properties, community gardens, parkland and other spaces.”Click here for more details via the Baltimore News Journal.